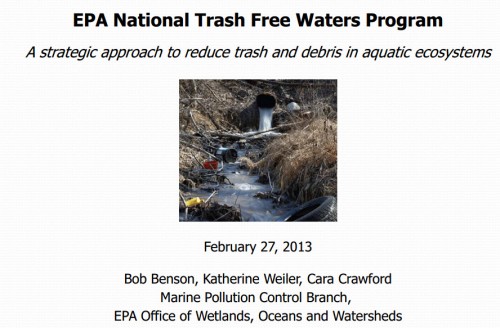 END_OF_DOCUMENT_TOKEN_TO_BE_REPLACED

The Schuylkill River through Fairmount Park is one of Philadelphia’s treasures.  Unfortunately, upstream stormwater runoff carries trash to the Schuylkill River,  where some gets caught on the River banks while the rest continues to flow downriver to the Delaware River and Bay.

This Schuylkill River bank trash survey was conducted on the West bank from the dam to Girard Ave bridge on 4/7/15.

There is a significant quantity of plastic debris along the shore line caught in the vegetation along the bank .

Philadelphia has a litter problem that causes water pollution problems in our local creeks, Schuylkill and Delaware Rivers as well as Delaware bay and Atlantic Ocean. Click this image to see how much litter accumulates in 95 feet of Philadelphia streets.

This litter photo survey was taken in the 6100 block of E Godfrey street near Adams Ave & Cresentville Road on 9/9/14.

I counted 155 pieces of litter in this 95 foot stretch of E Godfrey St. Count them yourself and see how many pieces you find.

Philadelphia stormwater carries much of the City’s plastic street litter to our local creeks, Delaware River, Delaware Bay and some of it makes it all the way to the North Atlantic Garbage Patch. This map of plastic concentrations in the North Atlantic has been constructed from 6136 surface tows conducted by the Sea Education Association (SEA) from 1986 to 2008. Dr. Kara Law’s Sept. 3, 2010 Science article is available here. (Phila. location added to original for geographic reference) 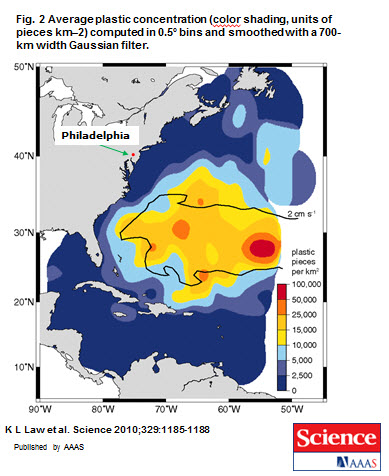 This map shows the variation and extent of plastic debris accumulation in the North Atlantic. Some areas have 0 pieces per square kilometer (km2) while other areas have levels of 50,000 – 100,000 pieces /km2. Oceanographers attribute much of the variation to differences in ocean current velocities as shown in this map of near real time currents available here. 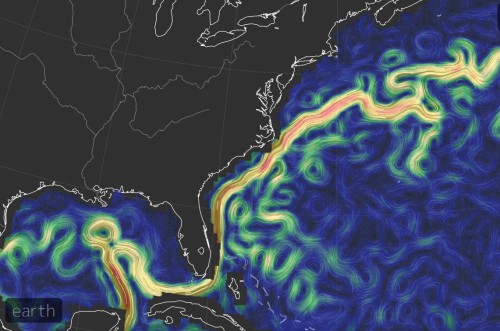 This map shows color coded ocean current velocities, with blue colors near 0 meters/ sec and red for fast currents of 1 meter/sec. The impact of the Gulf Stream is quite apparent and numerous low velocity eddy areas are also apparent.

If you look at the SEA map you will see a black contour line  which is the 2 cm per second contour of the 10-year (1993 to 2002) mean surface circulation velocity. 2 cm  per second (equivalent to 0.045 miles per hour), is a very slow velocity which enables plastic debris accumulation in these low velocity eddy areas.

SEA estimates that the Atlantic plastic patch has 800 million pieces of plastic with a low end gross weight estimate of 1,210 tons (2.4 million pounds).

What is Philadelphia’s contribution to the N Atlantic plastic trash patch?

We don’t know. We do now that Philadelphia street litter plastic makes its way to the Tookany-Tacony-Frankford Creek (link, link, link) , Schuylkill  and Delaware Rivers based on visual evidence along the creek-river banks.  We know the New Jersey and Delaware River communities downriver of Philadelphia  have trash problems along their waterfronts and we know that plastic has a very long life in the marine environment, so that it is logical to assume that some of Philadelphia’s plastic litter is contributing to the N Atlantic plastic patch. 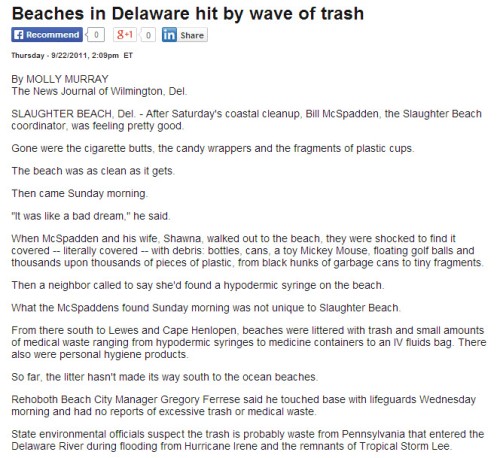 The Tookany-Tacony-Frankford Creek has proportionately more CSO discharges  than any other City receiving water.  This recent Philadelphia CSOCast map snapshot hows that 6 CSOs overflowed to the small TTF Creek in the prevous 24 hours compared to 6 each for the much larger Delaware and  Schuylkill Rivers and 4 to the small Cobbs-Darby Creek.